In a trip to new countries, food and drink can be so nice or so bad. the important thing is what we choose.

In Iran, there are several types of restaurants. Iranian traditional food, fast foods, Arabic foods and international foods. also for a drink, in Iran, you just can find alcohol free drinks.

in this article, we give you some information about foods, food price, and Iranian drinks.

Foods, you can find in Iran.

Iran is tourist country and from so many years ago, Iranian culture is mixed with many countries. foods are one of the important things in a culture. much more for Persian.

Iran is reaching country in food type. I think nobody in the world can’t count Iranian food types. but is a short trip, you can just taste some foods. so we give you some information about the famous Iranian foods. 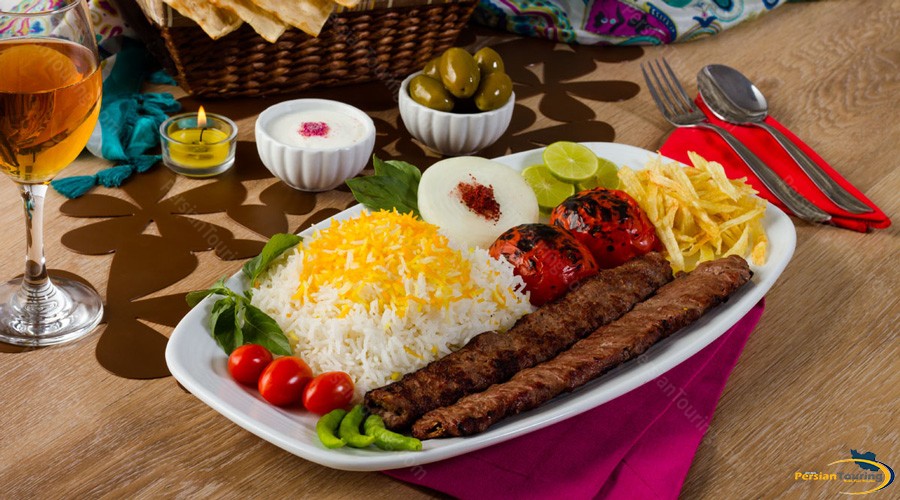 Chelow kabab is the national dish of Iran. The meal is simple, consisting of steamed, saffroned basmati or Persian rice and kabab, of which there are several distinct Persian varieties. This dish is served throughout Iran today but was traditionally associated with the northern part of the country.

Chelow kabab is served with the basic Iranian meal accompaniments, in addition to grilled tomatoes on the side of the rice, and butter on top of the rice. Somagh can be sprinkled on the rice. It is an old north-western tradition that a raw egg yolk is placed on top of the rice, though this is optional and no longer common. In fact, unless specifically requested, most restaurants will not serve the rice this way due to safety concerns surrounding the consumption of raw eggs.

In the old bazaar tradition, the rice and accompaniments are served first, immediately followed by the kababs, which are brought to the table by the waiter, who holds several skewers in his left hand, and a piece of flatbread in his right. A skewer is placed directly on the rice and while holding the kebab down on the rice with the bread, the skewer is quickly pulled out. With the two most common kebabs, barg and koobideh, two skewers are always served. In general, bazaar kabab restaurants only serve these two varieties, though there are exceptions. A combination of one barg and one koobideh is typically called a Soltani, meaning “for the Sultan”.

The traditional beverage of choice to accompany chelow kabab is dough, a Persian sour yogurt drink, flavored with salt and mint, and sometimes made with carbonated water. 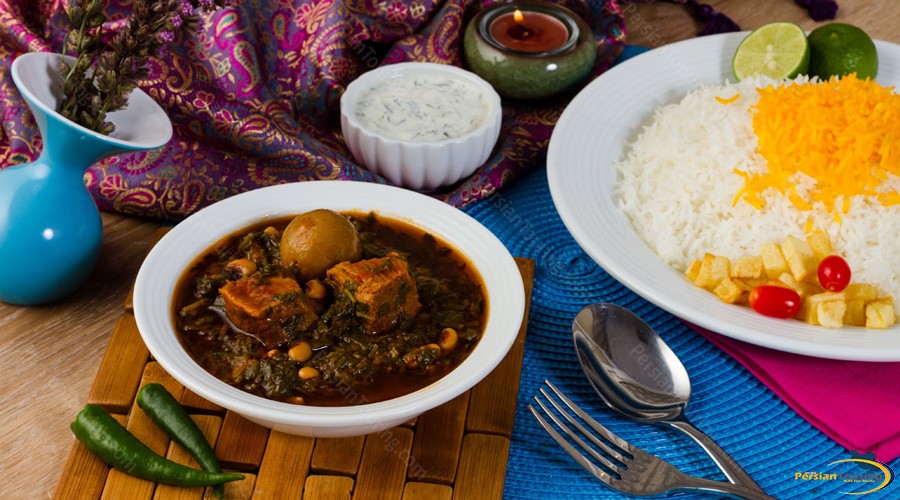 Ghormeh Sabzi also spelled as Qormeh Sabzi is an Iranian herb stew. It is a very popular dish in Iran and neighboring Azerbaijan Republic and is often said to be the Iranian national dish. The history of Ghormeh Sabzi dates back at least 500 to 2,000 years.

The main ingredients are a mixture of sauteed herbs, consisting mainly of parsley, leeks or green onions, coriander, seasoned with the key spice of dried fenugreek leaves. The herb mixture has many variations; any dark bitter green can be used.

This mixture is cooked with kidney beans or black-eyed peas, yellow or red onions, black lime, and turmeric-seasoned lamb or beef.The dish is then served with a polo or over tahdig. 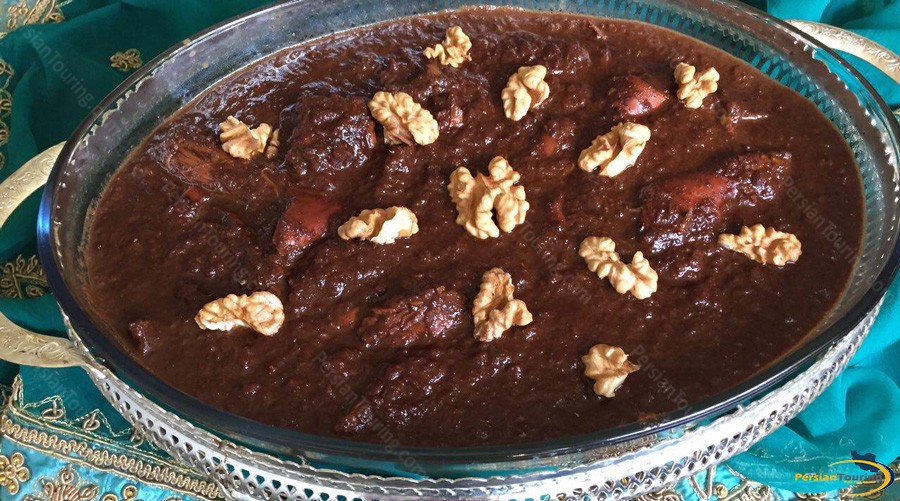 Khoresh-e fesenjān, or simply fesenjān, is an Iranian stew flavored with pomegranate syrup and ground walnuts. It is traditionally made with poultry, but also variants using balls of ground meat, ghormeh cut lamb, fish, or no meat at all are not unusual. Depending on the cooking method, it can have a sweet or sour taste. It is served with Persian white or yellow rice. 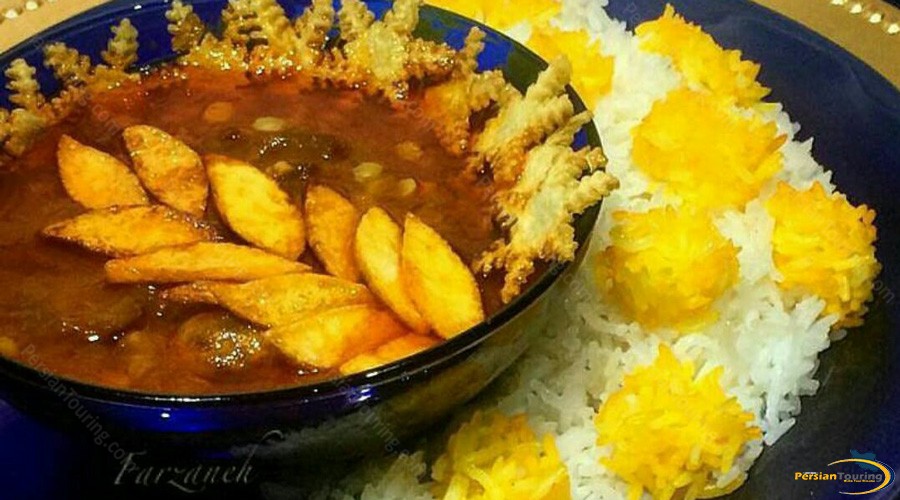 Gheimeh, Qeymeh is a Persian and Mesopotamian stew consisting of meat, tomatoes, split peas, onion and dried lime. This stew is garnished with aubergine and/or French fries and usually served with rice.

Iraqi Qeema is made with finely diced meat and crushed split peas and is traditionally prepared on a large communal scale at the annual Āshūrā commemorations. The name qeema is an ancient Akkadian word meaning ‘finely chopped’. 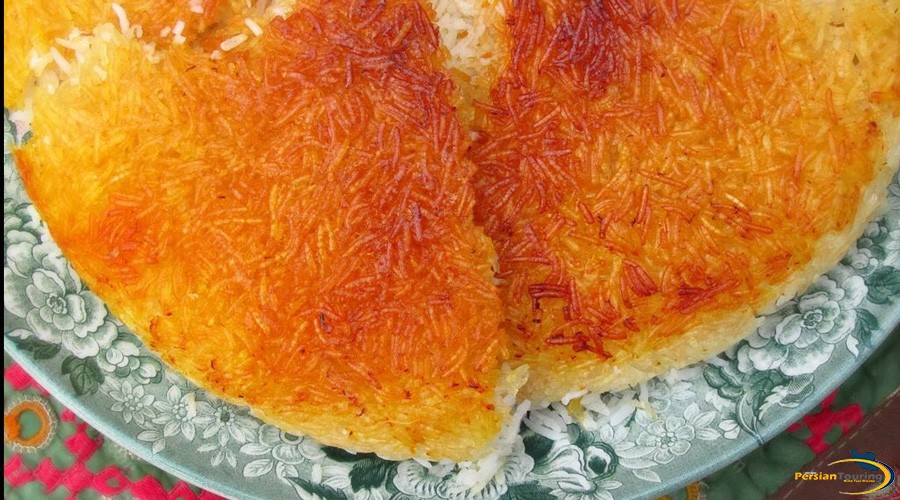 Tahdig is a specialty of Iranian cuisine consisting of crisp rice taken from the bottom of the pot in which the rice is cooked. It is traditionally served to guests at a meal. Ingredients commonly added to tahdig include yogurt and saffron, bread, potato, and tomato. Variations of tahdig include placing thin vegetable slices at the bottom of the pot, so they crisp up instead of the rice. Common vegetables include potato, carrots, and lettuce. Iranians also apply this crisping method to spaghetti as well, providing a hardened base. 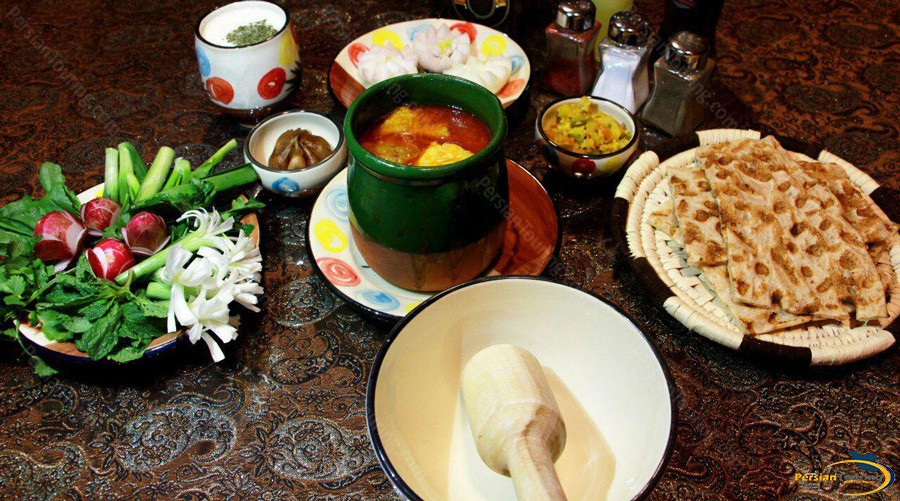 Abgoosht is a Persian and Mesopotamian stew. It is also called Dizi, which refers to the traditional stone crocks it is served in. Some describe it as a “hearty mutton soup thickened with chickpeas.” Ābgusht is usually made with lamb, chickpeas, white beans, onion, potatoes, and tomatoes, turmeric, and dried lime. Other variations exist in the beans used, such as kidney beans and black-eyed peas. The ingredients are combined together and cooked until done, at which point the dish is strained. The solids are then mashed as Gusht Kubideh and served with the broth, but in a separate dish, along with flatbread. It is a form of Piti, which encompasses many similar dishes in the region.

Hmmm, I can’t inform any more food. I feel hungry:(

so let’s learn about some Iranian Drink 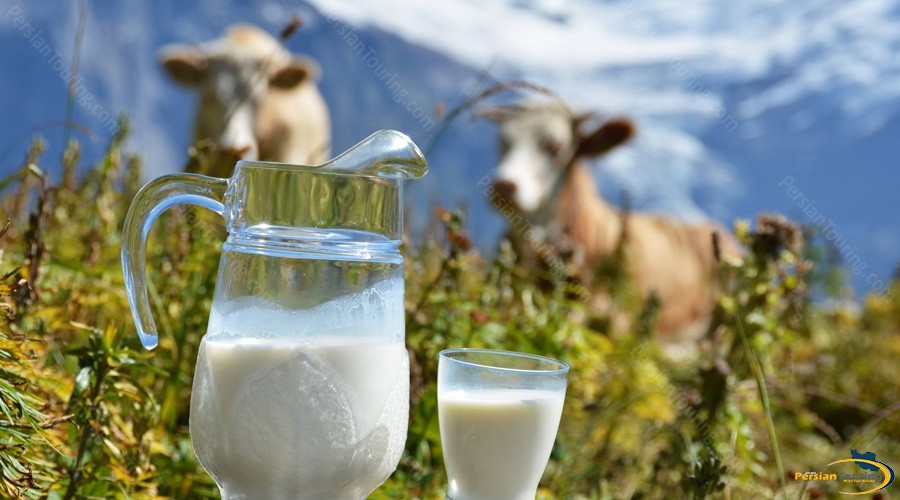 Doogh is a savory yogurt-based beverage popular in Iran, Azerbaijan, Afghanistan, Armenia, Iraq, and Syria. It is sometimes carbonated and seasoned with mint. Outside Iran and Azerbaijan, it is known by different names.

Doogh is described as being either the same as or very similar to the Turkish beverage ayran.

The dough has long been a popular drink and was consumed in ancient Persia. Described by an 1886 source as a cold drink of curdled milk and water seasoned with mint, its name derives from the Persian word for milking, dooshidan. By 2009 it was being referred to as a “minted yogurt drink”.

Salt is added, and commonly dried mint or pennyroyal is mixed in as well. One variation includes diced cucumbers to provide a crunchy texture to the beverage. Some varieties of dough lack carbonation. 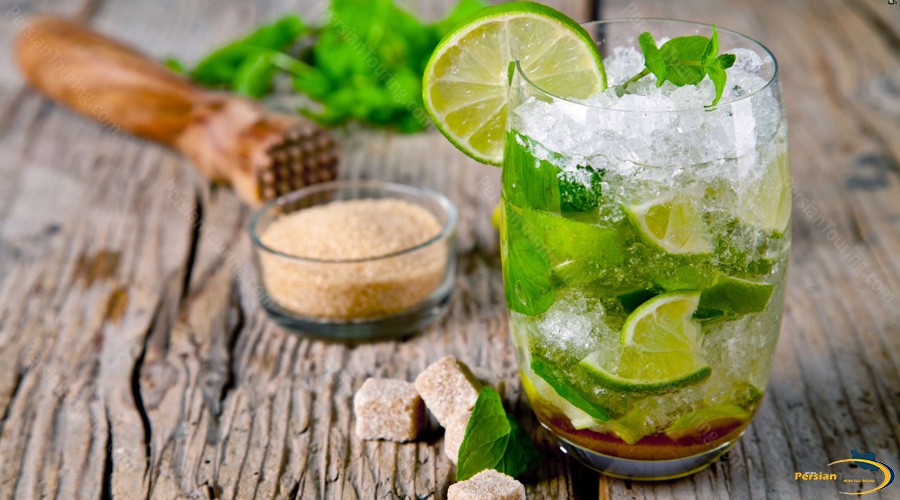 Sharbat or Sherbet is a popular West and South Asian drink that is prepared from fruits or flower petals. It is sweet and served chilled. It can be served in concentrate form and eaten with a spoon or diluted with water to create the drink. Popular sharbats are made of one or more of the following: Rosewater, Sandalwood, Bael, Gurhal, Lemon, Orange, Mango, Pineapple, and Falsa.

Most of the sharbats are very common in Indian, Turkish, Iranian, Arab, Afghan, Pakistani, and Bangladeshi homes.

It was popularised in the Indian subcontinent by Babur, who sent for frequent loads of ice from the Himalayas to make a cool refreshing drink.

In the gardens of the Ottoman Palace, spices and fruits to be used in sherbet were grown under the control of pharmacists and doctors of the Palace. 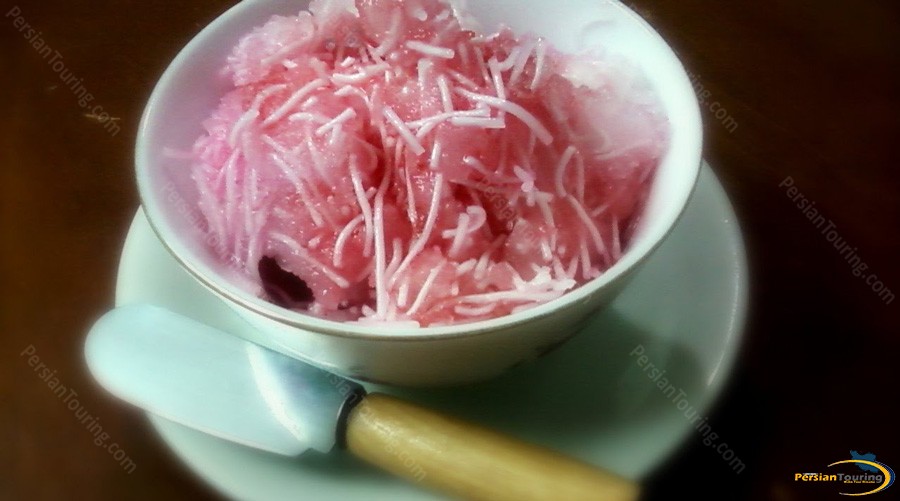 Faloodeh or Paloodeh is an Iranian cold dessert consisting of thin vermicelli noodles made from corn starch mixed in a semi-frozen syrup made from sugar and rose water. It is often served with lime juice and sometimes ground pistachios. It is a traditional dessert in Iran. Paloodeh is originally from Shiraz and it is also known as Shirazi Paloodeh.

Paloodeh is one of the earliest forms of cold desserts, existing as early as 400 BCE. The name originally means smoothly in the Persian language. In Iran, Paloodeh is sold in ice cream stores and coffee shops

A thin wheat starch batter is pressed through a sieve which further produces delicate strings. These strings look like a grated coconut. Cold milk with blended almonds and pistachios, and then cooled

you can also found all type of eastern and western foods in Iran international restaurants and fast foods.

In Iran, you can find several types of foods and several ranges of price.

but in the Normal range of Iranian restaurants, you charge 10 to 20 Dollar for an Iranian food such as Kabab and 5 to 10 $ for a Pizza.

sandwiches are so cheaper and you can find hamburger from 1$ to 5$.

in Iran, you can’t find any McDonald’s or KFC or other famous restaurants. but I eat the KFC and McDonald’s out of Iran and I tell you that Iranian fast foods are so better. for choose a good restaurant and fast food, just look at. normally best foods found in beautiful restaurants.

I use this method in my own trips in Iran and out of Iran. also, you can check with hotels for find a good one.